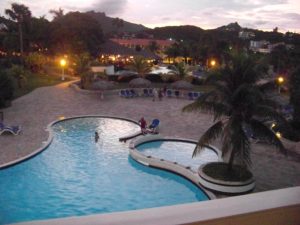 We were at dinner, a long table set out on the sand near the beach, the sun a beet red globe going down in flames over the ocean to the west, and I was looking at the LCD screen on my camera. Champagne was being served and there were lobster appetizers being handed out and a seafood feast was coming next. The general manager of the hotel was in attendance, soft music tinkled from the bar, and speeches were about to begin.

“My goodness,” said the lady sitting next to me. “Where did you take those photos?”

“If you look just over there, beyond the security guarding the front gates, there is something called ‘the real world’ where real people live,” I replied scrolling over my photos and showing her several. “What we have transpiring here on the beach tonight is just a fantasy.”

Where we were living like kings was an all-inclusive resort a few miles east of Puerto Plata on the north coast of the Dominican Republic, a well-established resort region that was in the process of re-branding itself as a luxury destination for Germans, British, Americans and (in my case) Canadians who lusted for a sunshine holiday that included all the food and drink you could handle. In all honesty, it was the unlimited booze that attracted the Brits and the Germans, who seemed to be in a contest to see who could get drunkest fastest. They went at it right after breakfast, passing out after lunch, and revving up again in the afternoon. I don’t know what they did at night, because I was busy stuffing fine and exotic foods down my craw like a freelance journalist. (“First rule of journalism: Never pay for your own drinks.) No doubt they were even drunker at night.

It was a press trip, selected journalists from selected publications invited to come to the Dominican and write rave reviews about the glorious sunshine, sandy beaches, local food and various attractions like the dolphin show at SeaWorld. How I managed to attract an invitation I didn’t know. I wrote travel articles for Canadian daily newspapers. There were direct flights from Canada to the Dominican. Given that the invitation had only arrived in my email box two days earlier, I surmised that the journalist for the New York Times had received a better offer and had cancelled. I was the last minute substitute. Whatever.

A last minute invitation like this incurred various issues. First, I knew nothing about the Dominican Republic, so a crash course on the culture was required. Second was the minor problem that I had no money whatsoever. My credit card was crying out for payment and my bank account was crying the blues as well. I borrowed $20 from my wife. I spent $6 for a hamburger in Santiago where we landed in the Dominican because there was nothing but crackers available on flights from Vancouver to Los Angeles and then to New York and on to the Caribbean. I came home with $12 in change. (I bought some bananas.)

The lack of time (and money) to prepare for the DR trip required me to go to Plan B. I went down to the basement of my house and dug out my Goody Box. This is where I store my baseball caps, t-shirts and other lightweight items that I bring with me to countries where there are possibilities to meet local people who might benefit from a small but caring gift. Baseball caps, t-shirts, deflated soccer balls, small digital cameras, thumb drives, school supplies (pens and markers), and other lightweight items can be stashed in a small overnight bag (the kind I always use on my trips) and take up little space. With proper planning, it’s amazing how much positive goodwill can be accomplished with the gift of a small selected item.

Baseball caps and t-shirts can be obtained in bulk at rummage sales in your own community at virtually no cost. I buy as many as I can at my community’s annual spring sale. Usually they cost $1 dollar each. One time I explained at my rummage sale exactly what I planned to do with all the caps I was buying and the lovely senior lady in charge of caps gave them to me for free. However, there is a catch involved. All the shirts and caps must have English lettering on them if you are taking them to “developing” countries. (Don’t try this at home.) English lettering points towards the faraway outside world, the world of richness and success. It doesn’t matter if the baseball cap says “Fred’s Electrical and Plumbing.” Retired basketball star Michael Jordan’s #23 shirt signifies greatness. Bring some Lebron James shirts with you and see what happens. 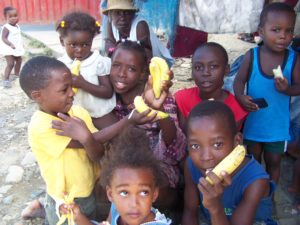 The day before I left, I went on to Google maps. I had the name and address and found the resort where we journalists were going to stay for 4 days. I zoomed in and looked around. Then I zoomed out and looked west (the east was ocean). I zoomed in again and found restaurants and plazas and the usual commercial entities. Within a minute I found what I was looking for, a “hostel” that encouraged tourists to do some volunteering. SunCampDR was listed as a “vacation apartment rental.” I looked at the website’s own description. “The best gift is to offer your presence and sharing your knowledge! We give priority to education and wish to occupy the free time of children and adolescents in the street. Since we live close to the tourist area, you can enjoy your leisure!”

I looked a bit deeper. The staff spoke English, French, German, Spanish, and Creole. The property owner was a French Canadian nurse named Diane Pellerin. That meant she spoke French. The hostel was located next to the village of Munoz, a refuge for Haitians escaping the absolute poverty of that land. The Haitians spoke French. Would Diane take me to visit the barrio of Munoz? Could I meet the Haitian refugees? Could I help them in some way? Could she translate? 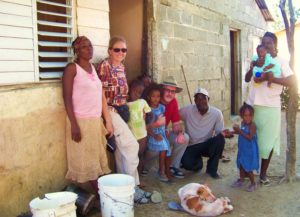 I emailed Diane immediately. I was lucky to get a quick response. Yes, she would meet me at the security gates of my 5-star all-inclusive resort in her old truck. No, there was no way she could enter the fancy resort and meet me there. We would drive a few miles back to her “apartment,” then she would take me to the barrio. Behind the barrio we would find the “batey,” a tar paper shack encampment where the Haitians lived.

I landed a half-day early in the DR on purpose, and (due to my request) arrived at Santiago airport located in the middle of the country in the mountains, much closer to the north coast than the capital of Santo Domingo to the far south. This gave me time to explore. I was met by two Dominican tourist reps, who could not understand my interest in driving back roads from the airport to the coast so I could witness what life was life for ordinary people. But we did. I checked in to my deluxe suite, then walked up to the security gates to find Diane, who was parked outside in her old pickup truck. Right on time. 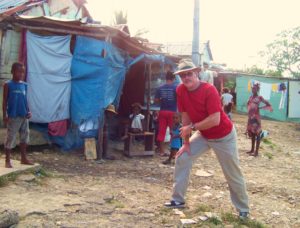 The instant we left the resort and crossed the highway we vanished from tourist fantasyland to the real world of the DR inhabited by real people. The road was paved for a few yards then devolved into a rough, potholed adventure. SunCamp proved to be the budget accommodations as advertised. We had a quick tour then headed straight to Munoz to meet the school principal. The “batey” turned out to be a small village of tarpaper shacks held together with wishful thinking and old tarpaulins. I could not imagine what would happen if a hurricane or major storm hit the village. The roads were unpaved, there were no stores, and the only building of any significance was a stucco church.

The church also contained a classroom, the only school in the village. Diane had told the principal I was coming and the children had been alerted that there would be a “guest.” They might as well have been told there was a Martian arriving. Tourists do not go to Munoz. As it turned out, the kids had never heard of Canada. It was a land far away. Even the nearest city of Puerto Plata was far away to them. Their world was the ghetto in which they lived. 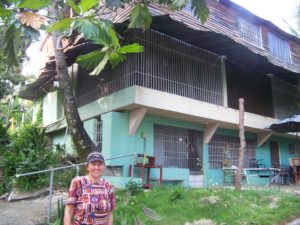 I made a very short speech to the kids. I explained to them the importance of getting an education. Diane translated. The kids actually listened carefully. Their eyes were all on the bundle of baseball caps that I carried. I made a special point of giving the caps to the school teacher, with a note that he would only be giving the caps to the “kids that did their homework.” It’s always important not to draw attention to yourself as the traveler, but to give power to the teacher or community leader who can act as an example for the local children to follow. If I had school supplies or a computer, I would have given them to him as well. I explained that literacy is the key to success in the world. Not a word was spoken, but the kids had their eye on the baseball caps. 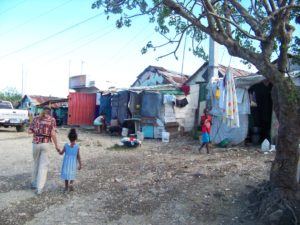 Diane led me on a tour of the batey, a real eye opener. Just up the road the Dominicans lived in poverty, but the Haitians were truly at the bottom of the social structure. They were pleased to pick sugar cane in the fields in the blazing heat for the equivalent of 50 cents a day which even the Dominicans wouldn’t do, because conditions were worse back in Haiti from where they had fled. I bought a small bushel of bananas for the kids to eat. The worst thing a traveler can do is hand out candies; bananas are a good source of food, and a bunch only cost me $1 U.S. 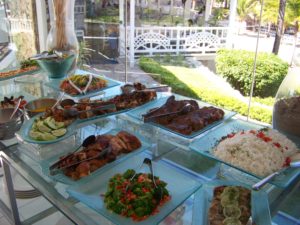 Diane drove me back to the resort gates. It was a 5 minute walk back to my room. Dinner was an extravaganza of seafood, barbequed meats, exotic fruits and champagne. The next day we were scheduled to have a helicopter flight over Puerto Plata, a visit to a cigar factory and then off to SeaWorld to swim with the dolphins. I forget all the other luxuries on the itinerary; the kiteboarding, beaches, rum shops and tourist attractions. It’s my visit to the batey that I remember best. It was full of real people, real life and to my mind people are far more interesting than cigar factories and seaside boutiques any day. I think the baseball caps were a hit. Say hello to Diane if you go. 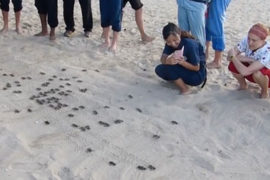